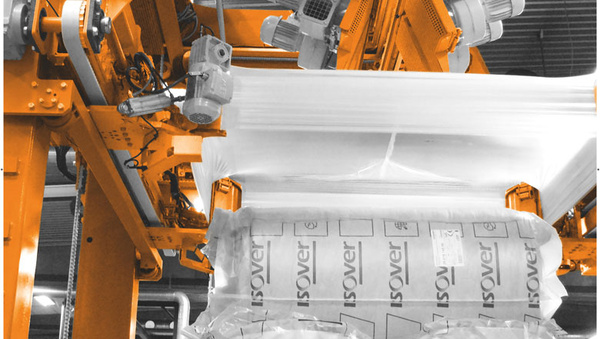 Since April 2016, MSK and Isover have been working on a new project to equip Isover’s plant in Orange, in the South of France, with a brand new stretch hooding solution for their pallets. Product and site specifications had to be taken into consideration to find the most suitable packaging system.

As a long term customer Isover, international producer of insulation products, naturally contacted MSK in 2016, when it started its new project to equip its plant in Orange (South of France) with a packaging system. Isover was facing numerous issues with this particular project – special production requirements, product specifications etc. One challenge was wrapping a new product that was very sensitive to moisture. The project goal was to find a supplier which was able to provide a system to make the loads waterproof, preferably with a pre-packaging made of stretch hood.
In January/February 2017, MSK suggested that Isover should perform a series of packaging trials on their products at the Saint-Gobain plant using the latest generation of MSK Tensiontech stretch hooding machine. MSK uses a special technology which creates reliable welds on the film hoods, providing products with optimal protection from environmental impacts. The system in Orange is able to wrap up to 95 pallets per hour (with the possibility of achieving 120 pallets/hour in the future), with four different film formats. The film hoods are stretched individually for each pallet size, to any longitudinal and transversal coordinates.
At the end of the tests, Isover Group’s central engineering department approved the solution of hooding half loads before palletizing.
Thanks to MSK’s extensive experience (over 40 years) in the field packaging and conveying systems and the numerous options offered by the group, MSK’s suggested solution proved to be the most suitable one.